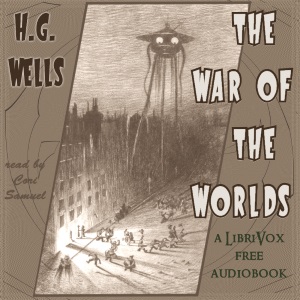 The works of H. G. Wells joined the public domain in Europe on 1st Jan this year. It seemed plain rude to let that milestone pass without my taking on something of his. The existing recordings of War of the Worlds at LibriVox were both over 10 years old, so I decided that was a good one to pick. Ably abetted by David and Dave, on coordination and proof-listening duties respectively, this was a relatively quick project to produce, starting on 24th August and launching on 8th October (so, 46 days all told.) It runs slightly under 7 hours.

I had no small amount of bother trying to avoid echoing Richard Burton’s ringing tones, where Jeff Wayne’s musical version used the text word-for-word. But listening to his outtakes did help a little. 🙂

You can listen to the first section below. Or visit the LibriVox catalogue or archive.org to download, for free, The War of the Worlds in various file formats.

Should you wish, there’s a very playable drinking game around his use of the word ‘tumult’! He must’ve won a Scrabble tournament with it or something, because he loves it unreasonably.

« New audiobook: The Soul of London by Ford Madox Ford
Copyright for children? »

This site uses Akismet to reduce spam. Learn how your comment data is processed.